Survive Dating be brave, be yourself and don’t give up.

How to survive dating.

Survive Dating be brave is an article written by Stella Grey about finding Mr Right using online dating services. Now although we’re not big fans of online dating, the principles Stella discusses about not giving up and persevering are well worth reading, which is why we are reproducing the article.

I had been married for 20 years when my husband – a man I thought of as my closest friend – announced he wanted a new life with someone else. I was 49, but essentially the story is the same at 29 and 39. For a while, the world looks as if it has ended, but the important thing to recognise is that this is a phase and you will survive it. At the time, it felt as if I wouldn’t. The mechanics of separating made it worse: the division of books and chairs and the pottery bought on holiday in France is actual hell. In comparison with that, the final document’s arrival in the post was strangely anticlimactic, it’s the ungluing of your two-person history that really unravels you. It got to the point at which something had to be done. I realised I could try to bring unhappiness to a halt. That’s how I came to sign up to online dating, five months after the separation. I went for the obvious candidates – Match.com, OkCupid, Guardian Soulmates and Plenty of Fish. I think I had expectations of it being friendly, civilized, a great big digital meet and greet, nothing of what I was getting into.

Before I sound as if I’m putting you off, I want to shout through a megaphone that you shouldn’t be. There are leg-over merchants and time-wasters, and lost souls making a god-awful mess, but there are also emotionally healthy men who really want something lasting.

I must emphasise that in the end I found him: the man who made me see that my husband wasn’t the love of my life. But when Edward and I first met there was no spark, no moment. He was wearing a terrible red beanie and anorak, towering over me at 6ft 5in, his manner stiff and deep-set eyes uncertain. Nevertheless, I had his niggling feeling. It’s difficult to explain what it was. It was probably more about what it wasn’t. It wasn’t…finished. I wasn’t sure that we were wasn’t… finished. I wasn’t sure that we were wrong for one another. I’d learnt a lot by then, after two years of trying, and I knew that people are rarely their best selves in situations loaded with so much anticipation.

Before we met, my online manhunt could be plotted on a graph as a fluctuating line of anxiety. My almost-quitting moments came when I’d written hundreds of emails that had been rebuffed or ignored, or when I’d been asked in a first phone conversation whether I was fully shaved. I almost gave up twice. The first time, I tried chatting up men in real life – in bookshops, coffee shops – and got nowhere. The second time, one last trawl produced Edward’s listing. When everything in you is saying, ‘I can’t do this any longer’, that’s the point at which lots of women turn away. I’m in favor of riding through it, of tweaking it, of spending quiet periods of not initiating contact but keeping the door open. The open door is crucial. Nobody can walk through a closed door.

Over the 693 days I was listed (yes, advertising myself- you have to get past that!), I learnt a lot. I became clearer about who I was but more fluid about what I wanted. I expected less and was less affected by failure. So what I will say is: stick with it. Leave the door open and stop obsessively watching it. Meanwhile, turn your attention to your life; at home, get offline, pull up your drawbridge. But go out, too; be with people you like and who stimulate you, and not always with vodka on the side. It’s important not to withdraw. The self-absorption of online dating can work its dark magic on you and leave you low in confidence. Anything that leads out from yourself and feeds back into yourself is important when under constant judgment.

For me, it was reading a lot, watching documentaries, learning, spending weekends with woman pals, making exciting plans just for me on my own, cooking well for one, and trying to treat each day like a treasured opportunity. It wasn’t easy, but trying made me feel better.

I made mistakes, too. I simplified my profile – self-protectively – to the point of blandness, and found romantic pen-friends. I emailed and emailed men, postponing the face-to-face, until the assumptions we both brought along to a first date were ludicrous. In one case we ‘fell in love’ beforehand, having written weeks of novels to one another. He took against me at first sight.

The constant physical judgment was a shock at first. I’m a fan of a sturdy man, greying, balding, a little world-weary, his life experience written on his face and in his eyes. I find middle age sexy in men in a way that few men I encountered on dating sites found sexy in women. You’re looking for the men who grant you the same leeway. You have to acquire a thicker skin and say, `Your loss, buddy’, while high-fiving yourself. Sure, I had bad experiences, but all were survivable, and looking back, most of them can now make me laugh.

As for Edward, the reason we’re together is that I had a moment of self-awareness, I realized after disastrous date two, in which neither of us could summon much conversation, that I’d said things that had been said to me by men who never wanted to see me again. I’d come out with, ‘It was lovely to meet you’ and ‘I had a nice time.’ My post-date communications were the chilly ones of a woman determined not to be hurt. Edward interpreted them as goodbye and went quiet. In a flash of intuition, I saw I had to be brave and say I’d like to see him again, and so I did, and his confidence was restored.

It was only on the third date that we began to talk unselfconsciously. On the way home he took his glove off to hold my hand and murmured, ‘That’s better.’ He leaned down and kissed me softly at the door. But it was the fourth meeting that really brought us together, via a plumbing crisis. He came over with a toolbag and fixed a spurting inlet pipe, and my self-marketing phase ended.

Early dates are often saturated in artificiality, and you need to get past that, to the laughing, to your everyday self and admissions about your own failings. Of course, sometimes it’s obvious on date one that the thing will never work. If he turns out to be a Trump supporter, for instance. But if there’s any doubt at all, persist. Sometimes the spark is a slow burner. It’s an accumulation of little things – seeing kindness in someone, bonding over a private joke, the gradual intimacy of pillow talk – that makes us fall for another human. That first-date thunderbolt people hope for – often that’s just chemistry, and hormones aren’t always a predictor of lasting love. Take your time. Give it space to develop. Do things together and wait and see.

Be your true self in your listing and photos. This isn’t the time to fake your emotional CV. If anyone makes you feel you’re being judged, patronized or used – forget it. Move on. The saving grace about internet dating is that it’s a sea full of fish. Edward and I are not alike but have crossing points. He’s a science geek who’s got me into stargazing. I’m a history buff who’s got him into ruins. But we click and keep on clicking. Each of us is broadening the scope of the other.

Trusting was hard, but once you let go of the safety rope, that’s when love really gets started. We live together now, and we’re talking about our old age and planning new adventures, and so online dating was worth it, every exasperating day of it. Don’t give up.

Serious about finding a Christian soulmate – then this ebook is for you! 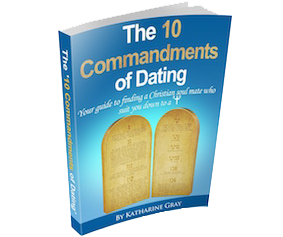