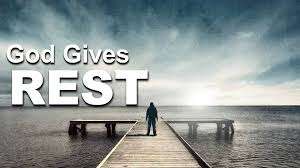 STOP, REST and LET GOD WORK IN YOUR LIFE!
By Sheila Jacobs

Like many of us, I’m sure, I have seen God work in amazing ways in my life. One of the biggest changes to my way of thinking regarding my Christian life happened when I was ill.

I had a disorder of the inner ear, eventually diagnosed as Meniere’s disease, but during most of my thirties the medical profession didn’t seem to know what the problem was – and neither did I. All I knew was that I couldn’t work, couldn’t go out, couldn’t live a normal life. I was terrified of having dizzy spells which would put me out of action of days on end. So my world became very small, as fear became a greater problem than the illness itself.

I had just come out of a long-term relationship with a man I had planned to marry. The Lord, however, had other ideas. Once free of the relationship, instead of going into the Christian ministry as I had anticipated, I got ill and my world closed down. Not my plan at all.
I couldn’t even go to church. At one stage, I couldn’t walk down my own front path. I had developed pretty severe agoraphobia. I said to God, ‘All I wanted to do was work for you.’ And he replied, ‘I don’t want you to work for me. I want to do my work in and through you.’
At that time, an older lady in the church sent me a book called Sit, Walk, Stand by Watchman Nee. It was all about resting in God. About ‘letting go’. And I saw how awesome the grace of God really is; that as we let go, he can begin to work in us.

Perhaps like me, you are a bit of a ‘do-er’. You come to Christ and then start to work like crazy for him! When I could do nothing, I had to rest. But I found that resting isn’t the same as doing nothing. As we rest in God, we actually do more – because he empowers us; Ephesians 2:10 tells us, ‘For we are God’s handiwork, created in Christ Jesus to do good works, which God prepared in advance for us to do’ (NIV 2011 UK). I like the thought of God’s advance planning – don’t you?

At any rate, I had a new revelation of God!

At that time, I realized that writing had been an idol in my life. Writing was something I could do from home, but I had never had any success with my fiction. The desire to publish a novel was all-encompassing; I’d tried unsuccessfully for many years. So I said, ‘I don’t want anything to come between you and me, God; I’m prepared to lay that down. I give it up.’ And I felt peaceful and happy about that decision.

Three weeks later, incredibly, I saw an advert from a Christian publisher that wanted new writers of fiction for children. I thought, ‘Well, I have something in my drawer; I’ll send away the sample chapters and that’ll be that. Last time I ever send anything away to a publisher.’ So I did. And to cut a long story short, within six months of ‘giving up’, I had my first novel accepted for publication.

The second time I ‘gave up’ was a few years’ later, when my health improved. I really needed a job. Trouble was, years of ill health and writing Christian fiction for children didn’t qualify me for much. Still not wanting to travel far from home, I couldn’t get work.

At that time, I went to a church service and received a special touch from God. After that, I couldn’t stop praising him. I simply stopped asking for work, I let go and sang and gave glory to God, much as Paul and Silas did when they were in an impossible situation, in prison (Acts 16). Incredibly, just over a week later, I was offered a job, editing books from home. Perfect! And not what I had planned at all. It couldn’t have been better. A job that God blessed and expanded. A job that I do to this day.

Then, some years further on, my mother became ill and went into a Home with dementia and other problems. I’d been praying for something in particular for six years, but in the light of everything else that was happening, I thought I may as well give up. I said to God, ‘You know, I have been praying for this for six years. I obviously got it wrong. I’m sorry. I’m giving up. But it hasn’t done my faith a lot of good!’ Two days later, out of the blue, that six-year prayer was answered! What a shock!

Although I have seen God work in wonderful ways, as I have related above, I wanted to see him work in my personal life. I asked God about this recently.
‘How come,’ I said, ‘You’ve never done anything in that area of my life?’
‘Because you won’t let me!’
What! I’d had one or two failures that hadn’t done my self-confidence much good. I felt ‘not good enough’, to be honest. But that changed when God spoke to me and said it was just like fishing and catching nothing (see John 21): ‘You just let your nets down in the wrong place, Sheila!’

And I also saw that the emotional void in me simply cannot be filled by another person. I was reading the story of the wedding at Cana in John’s Gospel, where Jesus turned the water into wine; a significant biblical picture, showing how he restores joy. I saw very clearly that Jesus himself is my ‘husband’. That he is in covenant relationship with me. That he has made ‘husband’ promises to me. One of those is that he will one day come and take me to a place he has prepared for me (John 14:2); a place in his Father’s house. Years ago, bridegrooms used to prepare a place in their father’s dwelling for their new wives, and then collect them. I could see clearly that this was a picture of how Jesus, the bridegroom, brings us into his own family; his Father becomes our Father. And of course one day, we will see him face to face.

But when I saw how precious I was to Jesus; how loved; I also saw a few things in me that needed to change. I’m quite a focused, driven person, but I needed to be the ‘beloved’ rather than the ‘lover’; to be pursued rather than the pursuer in many aspects of my life.
There were more things Jesus revealed to me that I haven’t got space to share with you here.

But I’d just like to encourage you to stop! God has good plans for you.

Perhaps it is time to sit down and rest in him. Seek his face first. Spend time with him in praise and worship. No one will ever love you like he does. Maybe, like me, there are areas within you that need some TLC; maybe even a change of attitude. Perhaps your need, like mine, is to find emotional security and fulfilment in Jesus first.
Let the Master Builder finish his lovely workpiece – you. Who knows what will happen when you trust him to work things out, rather than striving?

Sheila Jacobs is an award-winning author, editor and freelance writer. She lives in rural north Essex and is currently serving as a deacon in her local church.