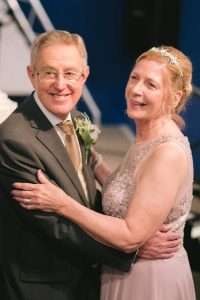 Here’s what Pam and Peter told their friends about meeting in their Christmas letter:

Pam and I started to get to know each other through a Christian dating agency towards the end of March, and after meeting up a couple of times, realised that we got so well that we went to the Isle of Wight for five days in June, got engaged there, and married on 5th October! Our families struggled a bit with the speed that everything happened, but they now agree it was the right thing to do.

The joyous wedding was held at Elim Pentecostal church in the centre of Bristol (where Pam has worshipped for many years) and the service was conducted by my minister (the vows & legal bits) and Pam’s Pastor (the intro, sermon and the ending). So it was a marriage of two faith traditions as well as two people. We continue to worship in our ‘old’ churches and also support each other in our ‘new’ churches, which is great. We are both learning and benefiting a lot from this.

We went to Rome for our honeymoon and the weather was perfect, no clouds in the sky every day bar one (and then it was only overcast) and 23C. We had a great time.

Pam has moved from Weston super Mare to my house in Alveston, and we’ve just finished merging our two households. To make our Christmas preparations an even bigger challenge, we are going to Paris for 4 days just before Christmas to celebrate Pam’s birthday.

In January we’re off to Southern India on a two-week singing holiday. And in September we’re going to South Africa for two weeks on a guided walking and sightseeing holiday, taking in major tourist destinations and a game reserve or two. 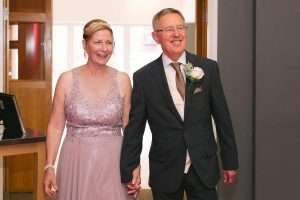 We’ve continued doing all the various activities that we’re involved in our churches. Also, to make retired life busier than ever, I responded to a deep calling to offer as a ‘Circuit Steward’. In simple terms, this means being part of the group responsible for all the Methodist churches in the Bristol & South Gloucestershire area. I had the prompting shortly after I met Pam but still decided to do it. If God wants something to happen, he enables it!  I love his sense of humour and timing!

A picture is worth a thousand words, so we’ve included a few (overleaf) to give you a flavour of our wedding day. In the group photo are Pam’s sons and my daughters. We are delighted that they all get on so well. The other picture is of Pam (not as dressed up as for the wedding!) and my mam. 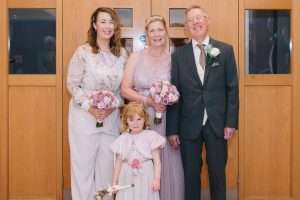 Nick (Pam’s eldest) lives in Frome with his family, and Ben lives just a few miles away from us in Horfield with his family. Catherine is still in London and recently got engaged to Rich (have we started a trend?). Rebecca still has her flat in Reading and there is no sign of a steady boyfriend yet, but with what’s happened recently, who knows?

Pam’s husband died 10 years ago, so we have much in common in that respect as well as in sharing our faith and many various interests.

We wish you a merry Christmas and a joyous, healthy and fulfilling New Year.

“I am writing to thank you once again for initiating the change in two lives. I contacted David early this year and after many phone calls arranged to meet. This […]

“Amy and I are planning to get married in a few months time. It was your team that helped me to get going again and I must thank you very […]

‘”We are so thankful for friendsfirst assistance and for the service that you provide. We have settled into married life very well and enclose a picture of our wedding day for […]