The Story of John and Pauline – Never give up hope 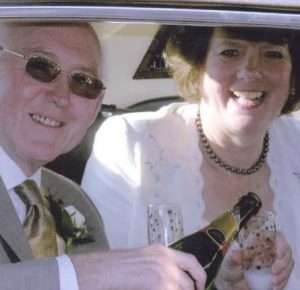 What! Start courting all over again at my age (69)! And what about the loyalty to my late wife to whom I was married for 45 years? These were just two of the questions that went through my mind when joining friendsfirst. But prayerfully and with much trepidation I did.

“Trust your instincts” was good advice. In my second mailing along came Pauline. Whow! All my instincts said, ‘Yes’; and within 7 months we were married. How good the Lord is. Had I given Him a list of requirements He would have replied “this and more!” Never had I dreamed of being so happy and contented again. Now after nearly two wonderful years, life with Pauline continues to grow even better. I am so grateful to the Lord for His guidance and the courage given to me to start again.

My thanks of course to friendsfirstand Katharine, and of course to our church secretary who published their advertisements in our magazine.

John and I met two years ago on 25th March 2003. I was widowed in 1984 at the age of 42. Over the years I joined a few Christian introduction agencies but I never stayed with them for very long. I found it extremely embarrassing if I did not want to meet the person I’d met again. In the end I just gave up and said I would never join an organisation again.

During the years, I also met three men who wanted to marry me but I did not feel the same way. I knew it was better to be alone than to marry the wrong man. I had always had the conviction that God wanted me to marry but the years had rolled by and I was still single. I was quite prepared to stay single if it was God’s will, but I began to feel it was right to join a Christian introduction agency once more.

I was now 60 and it was about 10 years since I had last joined one. The whole matter was laid before the Lord. I wanted only His will in this. I joined friendsfirst. My priority was to find a lovely Christian man who truly loved the Lord. I first met someone unsuitable and this time handled it without feeling badly about it. Then there were no names available for a while. I rang friendsfirst to cancel my membership after five months. Katharine persuaded me to continue and to see out the full year of my membership. When my next list of names came I scanned it to see if there was someone suitable. There was John. He said he loved the Lord and everything about him sounded right. He sounded a lovely caring man.

I wrote to John on 13th March and we met 12 days later. We knew immediately that we were attracted to each other and despite my plans to take the friendship slowly, John swept me off my feet and we married seven months later.

It is amazing to both of us how we fell in love almost immediately. We have a wonderful marriage and are very happy. I was a widow for 19 years so it was a tremendous change for me but we daily thank the Lord for bringing us together. We are grateful to friendsfirst for their part in this and we happily tell people how we met.

“It’s really happened – we’re engaged and both so thrilled and happy.”

I met my husband through friends1st and they’re very professional.  I waited for a long time for God to bring someone into my life and then I joined Friends1st. And […]