Hello all. I became a young Christian widower in 2015 and had spent the years before joining coming to terms with the grief I was going through, and getting to know people again. I hadn’t intended to date to help me with grief but looking back I realised that there are a lot of steps on a healing journey by 2018 I was ready to take bigger steps. I had recently moved house and felt in a growing season so in the April I joined Friends First it seemed like a good system so i thought I would give it a go. As a young Christian widower I was nervous at first I was encouraged to go on a first dates meal in London, Friends First had picked out a lady for this date but essentially God Had orchestrated it, she came from relatively nearby me, we went to similar churches and I used to work with her previous pastor when I was younger.

We went on a few dates and I knew God had brought us together but she was nervous as she had been hurt by bad boyfriends in the past but God had decided on this so on our 4th date he helped us along. We went to Littlehampton and had a candlelit picnic on the beach, after chatting eating and drinking the moon came out, it was a lunar eclipse it wasn’t meant to be and it was also a super moon which wasn’t on the calender eithe. We chatted some more and then I leaned in and kissed her and fireworks went off, literally someone set off fireworks on that night in August at that exact point in time, some time after we went home and the moon returned to normal which as far as I know doesn’t happen normally.
This was enough prompt for both of us so we started making plans to get married so I proposed on Penny’s birthday in August and we married earlier this year on the 13th of April 2019.
I would to thank everyone at friends first for being part of God’s plan and of course for God who has guided us both so far and I pray for other couples to have the same blessing. 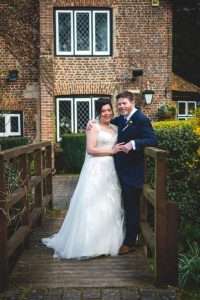