Becoming a mature Christian widow was a bit of a shock to me. I was 81 when Elma died; we’d been happily married for 56 years. The real 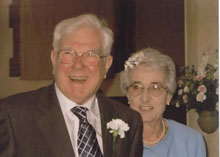 shock of being alone came after our three children had left for their homes after the funeral. The nearest was 130 miles away. They wouldn’t be popping in to see if their Dad was all right. Our little house felt like a huge railway station after the last train had gone. It was home no longer. When my tears and prayers had subsided, I pulled myself together. Jesus was still with me and somehow He would bring goodness out of my misery. I knew that. He told me so.

A year or so later, I had joined our local Writers Club. I read my little piece of story telling, putting a bit of character into it. Then the secretary said to me, ‘Eric, you ought to be on the telly. May I ask my agent to take you on her books.’ At that point, my life took a turn for the better. Before long, I was television ‘extra’, working and walking on sets with the well-known TV stars. Somebody needed this mature christian widow again. There were people to talk to and a purpose in living once more.

But my washing, ironing, and shopping still took their toll. I had no Home-help to aid me now. Nights were lonely and cheerless. There came another session of our Writers club. This time a friend handed me a leaflet. friendsfirst, it claimed, was especially for Christians – perfect for me, a mature Christian widow. I filled in the application and posted it. Who could possibly want an old geezer of 85? Nevertheless I wrote to one lady 300 miles away. She never replied to my letter. Again I gave up.

Then God showed His hand. One lady member of friendsfirst lived only a few miles away, and she answered my letter – she too was a mature Christian widow. We fixed our first date. She stood on the corner by the baker’s shop in her town as arranged. As I pulled up, we both fell in love at first sight. Within a month, I had proposed and she accepted. Within three months we had married and honeymooned in Scotland. Seven months later we are happily together in my home village; and that’s not all.

I rang my TV agent, “I’m married now. will you still need me on your books?” I related the details of self and bride. “From now on”, said my agent, “I’ll be able to use both of you. I’m short of pairs.” During the next two months, we worked on twelve scenes in a series of six episodes of ‘A Thing called Love’. Now we are not only together but able to show it on screen as a working and loving partnership.

But it’s not all glory and joy. There’s a downside too. Margaret had her own house and her own ways of doing every little task, and each one was different to my idea of home building. How do you take down the pictures of your own family and replace them with your new wife’s? Shift all your crockery from their old and loved positions, and let her put them where she likes them best? It isn’t easy. But that’s where prayer comes in. Since God Himself joined us in marriage He must know best. With any little disagreement or misunderstanding, we deal with it straightaway. Sometimes we share a few tearful few minutes, and then pray. It works. At our age, we have no time to fall out with each other, our life expectancy is too short. We only have time for happiness, understanding and joy in living. As Margaret tells me, “We have no time to waste!” The most amazing piece of advice though was given to me by my daughter. She is on her third marriage. “If you want to know how to fit two new ways of life together, ask me, I’ve done it!” But we have a better idea.

I had been a mature Christian widow for 9 years and dearly wanted to find a companion, so I joined friendsfirst. In my first year with them, only one man contacted me. He said that he found it a little too far to travel from his home in Kings Lynn to Lutterworth to see me. He was 81. For a while, I gave up in despair. Then friendsfirst sent another letter. This one held three men’s names: I choose two. It was now 2004. The first man phoned several times before visiting me. Although I had already told him that Saturday would be inconvenient, he turned up. Busy at the time, I could feel no companionship for him whatsoever.

Then Eric phoned, fixing our first date. The moment we met I knew that I loved him. I even got straight into his car, letting him drive me to nearby Rugby. After only three more meeting, he asked me to marry him. I agreed saying ‘Yes’ immediately. We couldn’t bear to be parted from one another. Within three months we were to marry.

At first, my family seemed worried, advising me to take things easy and think more carefully. But neither Eric nor I could wait. We knew that God was in charge and was drawing us closer together. Soon, all of our families had softened their hearts. Our wonderful wedding day arrive. All our friends and both of our families joined in with congratulations and good wishes.

Moving from my house to Eric’s brought its own problems. It wasn’t easy at first in a tiny village where I knew no-one. Everything from the local bus services and shops, to my faraway new doctor’s surgery and the superstore was strange and I missed my old home with my treasured possessions. Eric didn’t really want me to replace his ornaments, furnishings and pictures with mine. But we always talked everything over, compromising, changing a little at a time, and praying a lot. We found that we still knew very little about one another. Habits, mannerisms and desires had to be learnt. Even grumpiness and joys fought for top place in our days.

Over all these problems our love for one another blossomed and became ever deeper. We still cannot bear to be apart for very long. Those feelings of strangeness and of being a visitor in someone else’s house have faded into history. Then came Christmas time in 2004. It changed everything when some of our Christmas cards wished Goodwill and Happiness to Grand-dad and Grandma! Each others families had now become our own.

Yet all this took time, patience and lots of real love and many many prayers. We do thank the Lord for heaping us to meet and to marry. We know that He is always with us and will never fail us. Our ages may bring us problems in the future, yet God will surely bring us through.

We both thank friendsfirst for bringing us together and we pray for every blessing on them as they bring others into their folds and into God’s marvellous and overwhelming love.

“Please accept my resignation as I hope to remarry this summer. Thank you for all your help and your excellent services. My sincere thanks to you and your colleagues for […]

“When I got your profiles, no-one really jumped out at me and I did nothing. Then I reread your bumf and thought I should take your advice and be proactive […]

“Good news I got married last February. Although we didn’t meet directly through friendsfirst it got me in the frame of mood about meeting people. Thank you for your help”

“We are just writing to let you know we will not be rejoining friendsfirst because we are getting married. We cannot thank you enough that we met through you and are […]