A Love story in the countryside

Andrea had joined friends1st and made sure she was being as proactive in Christian dating as she could. She lived in the countryside and the number of single men she was meeting through friends and church was minimal. She’d been praying about a husband for a while and felt God asking her to push on a few doors.

Charles had moved into the countryside and didn’t know many people there, he too was struggling to meet new people especially in his age group.  Charles and Andrea were both in their 30’s when they joined friendsfirst. A key 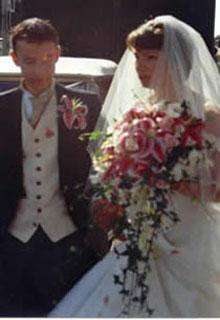 aspect for them both in joining was that it was Christian.

Both were active in their membership and proactive in Christian dating. Not being too concerned about distance, they had been contacting many of the people friendsfirst gave them. By chance they wrote to each other at the same time and their letters crossed. Charles was in touch with a number of girls but had immediately liked the sound of Andrea.

When they met for the first time for lunch, he knew immediately that ‘she was the one!’ Andrea was a little more cautious! Illness and holidays might have conspired against them but thankfully they didn’t, and soon they had a strong friendship and started ‘going out’. After 6 months Charles proposed by which time Andrea’s decision to say ‘Yes’ was an easy one. They were married 6 months later and certainly haven’t looked back since.

They both think that using friendsfirst was a great idea (in fact many of their single friends have now joined as a result!), because as they say “there’s nothing to lose and everything to gain, let alone a lot of fun in the process. If we weren’t proactive in Christian dating and with our membership, we would never have met.”

Just to say a big thank you to you and God for bringing myself and Emlyn together.  We have had a really good time whilst he has been up spending […]

It really , really and really was a great-pleasure being a member of Friendsfirst and on my part , I’ve got to date more and apply all that knowledge you’all sent […]

“I think your top tips book is absolutely delightful. I really enjoyed reading it – if no-one contacts me it’ll have been worth joining just for the book. It should […]