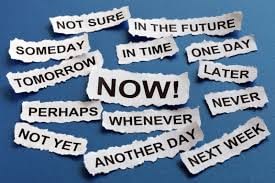 Confession time: I’m a serial procrastinator. Chances are you might be too. Well at least I  know one of you is – a member who just told me she kept meaning to contact others and go out socially but just hadn’t got round to it yet. Sound familiar. If so read on as this article might help you.

I’m the kind of person who will put off a tiny, five minute task like replying to a text message (unless it’s urgent, of course) or filing some paperwork for an embarrassingly long time, much to the chagrin of my husband, my friends… and to a certain extent my colleagues!

But here’s the kicker – back in my academic days, I found a nifty way of getting around this rather atrocious habit of mine. Nothing revolutionary in my mind, but when I shared it with others in a similar position, they would regard me with the abject horror typically reserved for those who claim they ‘melt stuff’ in their spare time because they like the fumes.

Set your own deadlines.

Before your close this magazine and resolve to never read anything penned by me again, hear me out: it sounds obvious, it sounds easy… but it’s not.

Of course you plan to have the work done early, that makes perfect (common) sense… right? And maybe it does, but there’s a reason why my fellow scholars-in-training would scoff at the idea whenever I presented it.

They didn’t trust themselves to adhere to them, knowing they weren’t the ‘real’ deadlines. We are all our own worst enemies when it comes to productivity and procrastination, and that niggling voice saying “well, you actually have until [this date] to get that done” is bound to sabotage you.

At my University, deadlines for assignments and the like were typically delivered in one go, at the same time, on paper at the start of each academic year. From my very first module as a fresher I was terrified of my procrastinating-tendencies messing up my chances of getting a good grade from the university I had fought tooth-and-claw to get into, so I got into my own deadline habit straight away:

As time goes on and your brain becomes filled with the fluff of life and learning you will forget the original deadlines. You will know that the ones you have aren’t ‘real’ but you won’t remember quite how unreal. Is it two days? Is it seven? Is it five or three? As long as you don’t cave and ask your in-class friends, there is no way you could possibly know. There will still be procrastination, there will still be late, coffee-infused nights pouring over the tiniest of details… but you will never actually be late.

That was my system back then, and it’s my system now. It’s not quite as effective as it once was as the ever-changing nature of the business means that I don’t have the luxury of knowing a year (or even a month’s) worth of deadlines in advance, but it still helps.

Why am I telling you all of this? Well, one Sunday last year I went to my very first TEDx in Liverpool.

It was a tremendously interesting, engaging and enlightening day with one particular speaker who, for the purpose of this article, stood out to me. Meet Chris Bailey.

Chris is, quite obviously, obsessed with productivity. As am I but to a lesser degree. The amount I get done in a day is in direct correlation with my happiness. As I result, I am almost always in a state of half-working. You can imagine how that works whilst being a serial procrastinator! Chris’ story was a highly entertaining one, with several clear takeaways: but there was one in particular that stood out to me, which I will paraphrase:

Being productive isn’t just about work, it’s about life. Productivity can apply to all things including rest and play.

This was a serious light bulb moment for me. My procrastination had always been a source of great frustration to me, because I associated it with unproductivity… which directly corresponded with my happiness. I once (while procrastinating, funnily enough!) stumbled across an article which described procrastination as The Dark Playground:

“The Dark Playground is a place every procrastinator knows well. It’s a place where leisure activities happen at times when leisure activities are not supposed to be happening. The fun you have in the Dark Playground isn’t actually fun because it’s completely unearned and the air is filled with guilt, anxiety, self-hatred, and dread” (read the full article at https://waitbutwhy.com/2013/10/why-procrastinators-procrastinate.html  – it has illustrations and everything!)

If you yourself procrastinate, you will probably understand this feeling. But this notion that productivity was related entirely to what it was you intended to achieve that day, even if that something is absolutely nothing, made me feel a little bit better about The Dark Playground and its many distractions. And then Chris mentioned something that really pricked my ears:

Once again, I reflected on my own processes, which do involve a varying amount of procrastination even on my most productive days. I then reflected deeper on the kind of things I typically did when I was procrastinating. Like most people my procrastination involves a little social media, listening to good podcasts and doing other stuff that needs doing but isn’t the thing I should be doing! (That in itself helps justify my procrastination even though I know really that it’s just another excuse.)

Because of increasing workloads and being keen to do a good job, I have taken to listening to podcasts (usually BBC Radio 4 ones – they have quite the collection) to satisfy my procrastination cravings. As a result, I have been able to get a great deal more work done, and at a slightly higher quality too if my metrics are to be believed.

Rather than beating myself up for wasting time in The Dark Playground, I have inadvertently let myself off the hook and quite unconsciously, found a way to productively procrastinate.

To me, procrastination is an essential part of the process. It’s only by embracing that and finding a way to do it in a less damaging way (i.e. podcasts) have I been able to use it productively and get plenty of work done, all-the-while feeling considerably less guilty. As a bonus, I am now feeling even less guilty about resting and playing in a productive way – getting the most out of both of these things whenever it’s time to do them.

My productivity mechanism (i.e. a Productive Procrastination Compromise) works beautifully for me, and it is different to the way Chris concluded worked best for him (35 hours of meditation a week), which tells me it’s a very personal thing. So, if you’re looking to boost your productivity levels, ask yourself the following questions:

So you’d be surprised at how effective being conscious about procrastination can be.

You’re probably wondering, how many times did I procrastinate while writing this article? Well, a fair bit. But a good hour of that was the gym in my lunch break, which I’m inclined to chalk up as a different kind of productivity and also essential for my well being.

Now, tell me, how many of you are procrastinating by reading this article? If you are now conscious of it, I’d say it was pretty productive procrastination.

Now, I’d best get back to work…