Bedfordshire Christian singles are even happier to report that at least one of our members from this county got married having met his soul mate through us. You could be the next!

It was way back ion 2003, that one of our older members -Bill from Biggleswade in Bedfordshire met and married his partner….

Bill’s wife died early in 2002 after 41 years of marriage and he was on his own for the first time in his life. It was awful for him and the evenings were worst when his family, who lived nearby, had gone home. He joined friendsfirst and received his first set of profiles in August. He might not have rung Lois, as he would have had to travel round the dreaded M25 to get to Basingstoke where she lived. Luckily she phoned him and from the 1st moment they met at Basingstoke Railway Station it was right. Bill found himself giving Lois a huge hug, which took him by surprise as he’s not a spontaneous person. From then on things moved very quickly and when Lois went to visit her daughter in Scotland 2 weeks later any doubts they may have had disappeared.  They talked on the phone every day and both families were’ tickled pink’ at the idea of romance at 70 for their aged parents.  They are very happy and feel very blessed in their life together.

Bill and Lois’s advice to anyone hesitating about taking such a step – GO FOR IT!!! You have nothing to lose and maybe a whole new life to gain. You can read their story in full by clicking here.

These are the towns in Bedfordshire that our members have come from:

If you are a Bedfordshire Christian single and you live in a town which isn’t listed here, then do call us on  0121 371 0384 as we have members joining every day and someone may well have joined from the town you are looking for. Alternatively call us to see how our membership differs from anything you’ll have found anywhere else and why our members are so successful in finding partners as a result. 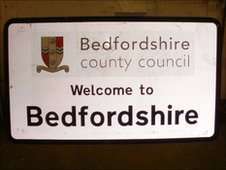 “When I got your profiles, no-one really jumped out at me and I did nothing. Then I reread your bumf and thought I should take your advice and be proactive […]

“I am writing to you to convey the good news that Susie and I have become engaged after meeting through your organisation. I wish to thank you as you were […]

“I just want to thank you for your ministry of friendsfirst. I know that it is ‘God led’ and has the Lord’s stamp of approval on this valuable service. After my […]

“Hi Katharine, We are not feeling lonely anymore thank you! Through friendsfirst James and I met.  Dates went well and we fell in love.  Three weeks ago we got engaged.  We are […]