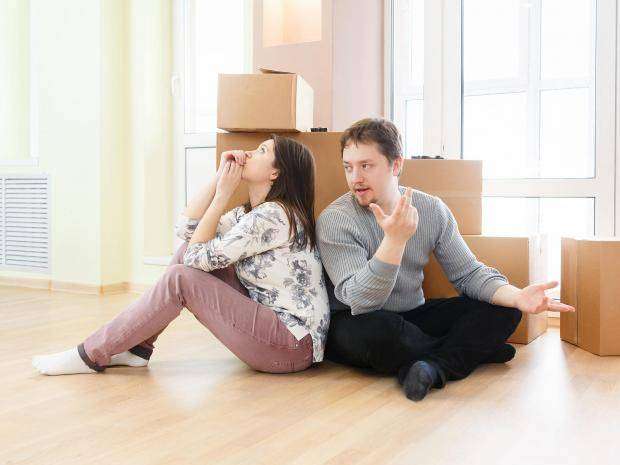 (By Matt Walsh across the pond, from his channel: The blaze)

It’s often said that living together before marriage is a good way to “practice.” Oddly though, as more and more Americans “practice marriage” in this way, fewer and fewer Americans are actually getting married. It seems everyone is practicing but nobody is playing. And if the cohabiting couple ever does tie the knot, studies have repeatedly shown that their chances of divorce have only increased. This is a very strange sort of practice. It appears that cohabitation is more likely to be divorce practice than marriage practice. But why? I can think of 5 reasons living together before marriage will kill your relationship (at least):

1) There is no commitment.

How can you practice committing to someone by not committing to them? You either commit or you don’t. There is no halfway point. Marriage is marriage because of the eternal promise you made to your beloved. Mere cohabitation is mere cohabitation precisely because you declined to make that promise. You can’t practice the undying devotion of marriage by taking on a roommate any more than you can practice parenthood by adopting a parakeet or buying a houseplant. It’s one of those all-or-nothing propositions.

People often say that getting married without cohabitation is like buying a vehicle you haven’t taken on a test drive. Well, it seems weird to compare your betrothed to a Toyota Corolla, but, alright, let’s go with this extraordinarily inadequate metaphor. If marriage is a car, then commitment is the engine. It’s the thing that propels the marriage, gives it life, defines it, makes it worth something. So, “test driving” this particular automobile is like whipping the wheel back and forth in a vehicle with no engine. It may be a fun way to let off some steam, but you aren’t going anywhere, you aren’t doing anything, and you certainly aren’t learning what it’s like to actually drive on the highway.

It’s not enough to say that cohabitation is different from marriage. The truth is that it’s the direct opposite of marriage. In marriage, you live as one united through sickness and health until death do you part. In cohabitation, you live as two divided, for an undetermined period of time, for as long as it remains convenient until one or both of you decides otherwise. You may point out that many modern marriages function more like the latter than the former, and I’d agree. That’s the point. Cohabitation doesn’t resemble marriage, but, in our culture, marriage increasingly resembles cohabitation.

Couples inevitably bring the cohabitating mindset into marriage because it’s hard to flip the switch, especially when your married life looks on the surface almost exactly like your life before. You leave the wedding reception and return to the apartment you already shared and the lives that were already intertwined in every practical way. The only difference — and it’s a huge one, a defining one — is that now you’ve made a lifelong commitment to one another. But that’s not what you’ve practiced. You haven’t practiced commitment, you’ve practiced avoiding it. You’ve practiced living with this person tenuously and conditionally, and, whether you intend to or not, there’s a good chance you’ll continue on living exactly as you rehearsed.

2) Cohabitating puts the emphasis on the wrong things.

The most hilarious justification offered for cohabitation is that you need to make sure your partner has no “annoying” or “gross” habits. This is kind of like saying you need to jump in the ocean to make sure it isn’t too moist. Everyone has annoying and gross habits. It’s part of being a person. The only way to ensure that your partner has no irritating tendencies is to marry someone in a coma.

As for conscious human beings, there is no mystery. This is especially important for women to understand. Ladies, no reason to speculate here. Yes, your boyfriend is a pig and he would live in utter filth and disarray if left to his own devices. My apartment resembled an abandoned refugee camp when I was single. My bathroom was the stuff of nightmares. My kitchen looked like a nuclear testing site even though I only used it to cook twice in five years. I’m not a homemaker, in other words. Few men are. You don’t need to live with them before marriage to investigate the matter. This is just a fact of life and you’re either prepared to deal with it or not. You either love your man enough to cope with it or you don’t.

But men aren’t the only culprits. No person is easy to live with all the time. They all have their hang ups, tics, and idiosyncrasies. They chew with their mouth open or they leave wet towels on the floor or they always misplace their car keys or they snore or they have a habit of tripping while holding glasses filled with dark liquids and spilling said liquids all over various rugs and items of furniture (guilty) or they do a million other things that you wish they wouldn’t do but they keep on doing. And so what?

If you set out to discover those kinds of things before you get married, you’ve only sent the message that your marriage will be predicated on them. “OK, I’m marrying you because I’ve decided that you aren’t too annoying or gross or inconvenient to have around,” you say. But what happens after a few months of actual marriage when certain annoyances and inconveniences pop up? What happens when you realize that your marriage simulation failed. The results were faulty. You were duped. He’s not perfect. He has flaws. He is a human being, it turns out. What now?

“Irreconcilable differences,” you tell the judge. “He leaves the cap off the toothpaste and forgets to put the milk back in the fridge.”

3) Living together before marriage makes it too hard to leave.

It should be easy to split up with someone you haven’t married. “I want to leave but it’s complicated,” people often say. But it isn’t complicated. Or it shouldn’t be. She isn’t your wife. You aren’t committed to her. Complicated? She’s just your girlfriend. Call her up, tell her it’s over, and move on. Complicated? You’re just dating. There are no stakes to this. It doesn’t matter. Where’s the complication? Ah, well you’re living together. You can’t walk your separate ways without selling the condo and figuring out a custody arrangement for the dog. Suddenly, what should be a very simple and straightforward breakup is now like some kind of mini-divorce. A divorce dress rehearsal.

It shouldn’t be this way. Think of that De Niro line from Heat: “Don’t let yourself get attached to anything you are not willing to walk out on in 30 seconds flat if you feel the heat around the corner.” That’s a terrible way to operate in a marriage but it’s not a bad way to approach the dating scene, especially if you conduct elaborate bank heists for a living. If there’s a good reason to abandon ship — a lack of trust or honesty, conflicting priorities in life, different values, etc. —  you ought to be in a position where you can jump overboard immediately, needing only to stop by their place and pick up your phone charger as you swim to shore. So, maybe not 30 seconds, but it shouldn’t take more than 30 minutes or so to completely sever ties.

There are a great many shacked up couples who are only together today because breaking up would be too much of a hassle. Some people live together for years under these circumstances. They have the complications and entanglements of marriage without the commitment or the stability. It’s the worst of all worlds. And then what happens? They stay together because it’s too complicated to split, and then, after a while, they get hitched by default.

Now they’re married despite having grown tired of each other years ago. They’re an old, weary married couple before they even cut the cake. They’ve jettisoned right past their marriage’s infancy and energetic youth and started in the middle of its midlife crisis. The marriage is new, but it has no novelty. The honeymoon wore off before it happened. Why do you think people these days complain of being “bored” in their marriages after, like, 6 months? They got a head start on the boredom. And that’s not a great way to begin a marriage.

4) You can figure out everything you need to know about someone without living with them.

Here are the things we ought to ask ourselves about the people we’re dating: Are they faithful? Are they honest? Do they have a good heart? Are they virtuous? Do they love God? Do they keep their promises? Do we have the same fundamental goals and priorities in life? That’s all that really matters.

I saw all of that in my wife almost immediately. I don’t understand how you could date a woman for months or even years and still be unsure about her qualities. Either you have the perceptiveness of a potato, or, more likely, you know everything you need to know but you’re afraid to take the next step — whether that step is a break up or an engagement ring.

This is a pretty reliable rule: If you’ve been with someone for a few months and you still have no idea whether he fits any of the criteria I listed above — he doesn’t. Don’t move in with him to get a closer look. Just leave. If he’s not obviously honest, faithful, and good-hearted, he’s probably not honest, faithful, and good-hearted at all. OK, maybe he’s a sociopath who can fool everyone into thinking he’s Prince Charming while he carries on a double life as mob hit man, but probably not. In most cases, it doesn’t take long to assess the character of a person. If you need to sleep in a man’s bed to see his virtue, he has none.

Generally speaking, any bit of marriage wisdom that became popular in the 1960s or more recently should be ignored. Perhaps there’s an exception but I can’t think of what it might be. Sure, husbands in those days may have been a little too emotionally distant. Wives may have been a little too limited in their options outside the home. But these days, husbands are effeminate crybabies and wives will do just about anything to avoid raising their own kids, so it’s hard for me to say we’ve offered a valid correction in this regard or any other.

We get it almost completely wrong. You could disregard everything that’s been said about marriage in the last 50 years and your marriage would be happier and sturdier because of it. Just look at how people today commonly operate in their romantic relationships and do the opposite. Find the road with the fewest tire marks and drive down it. That’s a good way to approach all things in life, especially marriage.

To see more from Matt Walsh, visit his channel on The Blaze.